Awarded by Illinois State's chapter of the American Democracy Project, recognizing the School's commitment to educating students for citizenship across the curriculum and co-curriculum.

The School's graduate program launched an initiative in 2009 that seeks to end bullying in local junior high and elementary schools by teaching conflict resolution skills. The TRANSFORMERS program received Illinois State's Civic Engagement Award as well as a grant to support their work from the American Democracy project in 2011.

The School's introductory communication course (COM 110) was recognized in 2008 as a national Program of Excellence by the National Communication Association. The course is also a staple of Illinois State's Political Engagement Project which was recognized as a national exemplar by The New York Times and American Association of State Colleges and Universities in summer 2011.

The inaugural Walter Cronkite Civic Engagement Leadership Award was presented to Illinois State University for its student outreach on behalf of both civic engagement and in support of Film Your Issue, a film festival that invited all young Americans to create personal "issue films" as a way to engage young people in pressing contemporary issues.

School of Communication faculty have won more university teaching awards than any other unit on campus since 2002, as well as several significant regional and national teaching awards.

WGLT public radio is an NPR member station licensed to Illinois State and has been a part of the School of Communication since 1997. The station has been honored with scores of regional and national awards for excellence by the Associated Press, Kaleidoscope, Public Radio News Directors, Inc and the prestigious Edward R. Murrow awards from the Radio Television Digital News Association. 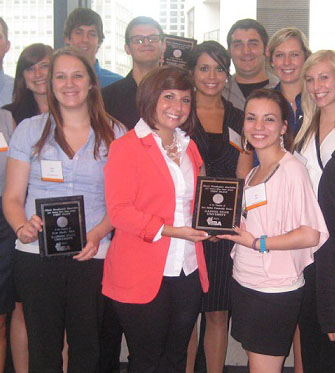